Each player takes turns placing one stone at a time with the goal of capturing the enemy’s stones and/or surrounding as much territory as possible.

At the end of the game – when all territories have been completely surrounded – the player with the most surrounded territory and captured stones wins.

Black always goes first, so white is given compensation for going second in the form of typically 6.5 extra points when counting the score at the end of the game. These extra points are called komi.

To capture a stone (or group of stones) you must completely surround it.

We can see on the right that black’s stone starts with 4 liberties. Note that liberties are only up, down & across, not diagonal.

In E, white places a stone, taking up black’s last liberty. Now that black’s stone is captured, white takes the stone and puts it aside for later counting. 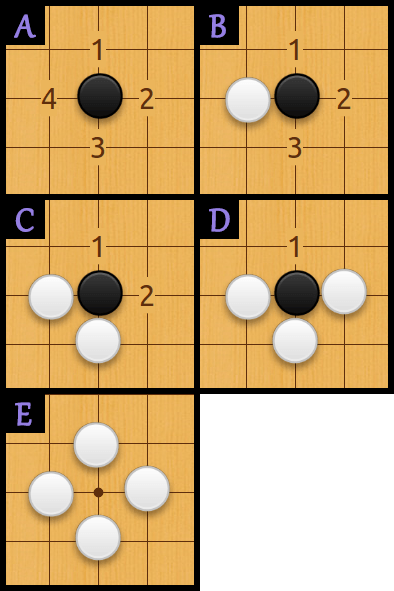 The game is officially over when both players pass consecutively.

There are different scoring rules but the most common are Japanese rules, which we will use here.

Remember though, that we also count prisoners (the stones you’ve captured). We can see that black has captured 1 stone and white has captured 8 stones (5 already captured + 3 on the board which are considered dead).

Let’s tally up the score to see who has won.

White has won by 22.5 points, which is quite a significant victory.

The Suicide Rule says that you can’t place a stone that immediately dies.

If we imagine black placing a stone at A, the stone would immediately have 0 liberties and be automatically captured by white.

It’s a useless move that gives your opponent 1 point so it’s an illegal move in the Japanese rule set. 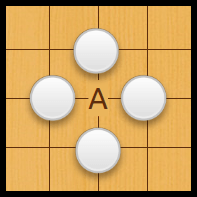 Imagine a fight like on the right where both players are not willing to give up their stone, and instead they keep taking each others stone over and over again.

If they stubbornly refuse to lose the fight, the game may go on forever.

To prevent this situation, the rule of ko was created: “The board position cannot repeat itself.”. That is to say, the board can never look the exact same as it once did during that game.

This means that when black takes our stone, we cannot immediately take back. Instead we must play elsewhere – changing the board position – before having the option of taking the stone back again.

That’s it! Those are the basic rules of Go. Try play a game (See Playing Online) or consider digging deeper (See “Elementary Concepts”).

For a different angle on the rules, I recommend Sunday Go Lessons’ video.